If You Think Slurs Belong in Sports, You’re an Idiot

Fans were quick to come to Kevin Pillar's defense after he caught using a homophobic slur. The only question is, why are they defending him?

There’s an epidemic in sports, and fans are to blame.

Case in point, the fan response to Kevin Pillar’s homophobic slur and subsequent suspension by the Toronto Blue Jays.

Following the Jays’ announcement that Pillar would be banned for two games, the worst of the worst crawled out from their poorly-lit basement apartments to weigh-in on just how offended they were by how offended other people were. Here’s a small sample of those ramblings, to ruin your day.

2 games for Pillar? Team suspension? Ross Atkins is a big ol' bundle of sticks if you ask me #Jays

The Kevin Pillar suspension is the Blue Jays being pussies. #DBAP. That word has nothing to do with homophobia. It's just an insult.

…apparently old adage, "sticks and stones may break my bones but words can never hurt me" is no longer applicable to snowflake generation.

Sadly, these opinions were quite common ones.

So to those of you that truly, in your heart of hearts, believe these things, I have only one thing to say.

There’s no reason to sugarcoat this. These people believe that Pillar was innocent and that his only fault was that he was at the wrong place at the wrong time when the liberal-agenda witch-hunt caught up with him. And those people (and their opinions) are ignorant.

And since we’re responsible for talking about sports here, and the people that follow them, we have a duty to examine how mind-numbingly idiotic these fan responses really are. Let’s begin.

Idiotic response #1: ‘PC culture is ruining the game of baseball’.

This Pillar suspension is horseshit. Take mics off the ballpark if you don't want to hear shit talking. I've had enough of these #CryBullies

This is possibly the most hilarious and uninformed argument on this list (Although any of the following could fit that description). The logic goes that sports are an easy target for the communist-sympathizing, granola-snacking, liberal-leaning hippies of the world that are hell-bent on seeing good-old-boys play the game in bubble wrap and full safety padding.

Reality check: There is no bogeyman.

This is an issue of human decency.

Slurs are considered slurs for a reason. They go beyond mere insults and have a deep-rooted history in a painful shared experience. Yes, words are only words, but slurs are slurs because of the power they have to subjugate a person or group. So avoiding them is the decent thing to do as a professional athlete, let alone a human being.

If you truly believe that one of the main tenets of sports is ignoring basic human decency, then you don’t really understand what sports are all about.

Now about the ruining baseball part.

When was the last time you were at a game, the smell of hot dogs and stale beer in the air, and you say to yourself, ‘You know what I could really go for right now? A home run, and someone calling someone else a homophobic slur. Yeah, that would really improve my fan experience.’

Idiotic response #2: ‘In the heat of the moment, things are said.’

What a joke young man in heat of battle made a mistake very poor choice of words but sincerely apologized, that should be enough

No, no it shouldn’t be enough.

For an athlete to avoid a suspension, there are roughly seven words they can’t use to insult one another.

That’s a laughably low threshold to continue to do your job.

In the heat of any moment, no matter how angry you become, and how badly wronged you feel, you should be able to refrain from saying what amounts to fewer words than you have fingers.

RELATED:   How Josh Hader Can Become the Face of the Anti-Hate Movement

Remove the human decency angle for a minute, and realize that if you, as part of your job, can’t summon the self-control to stop yourself from using any one of seven words that are banned, meanwhile getting paid millions of dollars a year to avoid saying those seven words, then frankly, you don’t deserve to play this game.

Idiotic fan rebuttal to the rebuttal of idiotic point #2: ‘But seriously this isn’t a normal workplace. This is a battle, and it’s…different.’

Get a pass…? During battle…? What?

Don’t get me wrong. I love me a good sports/war analogy as much as the next guy. But to equate trying to hit a baseball in the safe confines of a grassy field surrounded by happy spectators with being shot at and having a chance of dying, and then using that overblown analogy to justify this behaviour is beyond hilariously idiotic.

This is a workplace. Not a war zone. Let me repeat that because it hasn’t really sunk in for everyone yet apparently.

This is a workplace.

Sure, it’s a workplace that’s on a larger stage, and an athlete’s exploits are constantly on display for the world to see. And sure, baseball is a physically and mentally demanding game, played at a high level of intensity. (Shut up. Baseball is intense. Stop laughing. It really is. Ok fine. Whatever. Agree to disagree.) But at the end of the day, this is still a professional atmosphere.

And don’t forget, there are many, many other professions that meet those exact same criteria as the ones outlined above. And yet, they don’t get the same exemptions from proper social behaviour. If you utter something like this in any other work atmosphere, there’s a great chance you’d lose your job. And Pillar isn’t losing his job, he’s being prevented from playing it for what equates to an hour in baseball terms. So no, a sport doesn’t get a special exemption here.

Idiotic response #3: ‘Trash talk is part of the game’.

Pillar suspended come on now. I can only imagine what kind of trash talk occurs in other sports too, especially in the heat of the moment.

The best trash talkers are interesting, quick, creative, and devastating. They find weaknesses and exploit them. They demoralize their opponents, energize their fanbases, and rally their teams. That’s the point of trash talk.

Using a slur isn’t trash talk. It’s cheap, dirty, lazy, and does none of the above.

If you’re truly a fan of excellent trash talk in sports, what you should be really mad at is how low the bar apparently is for what’s deemed trash talk. If you’re a fervent defender of players trash talking their opponents, this shouldn’t be good enough for you. Pillar didn’t bring his team a win. Fans aren’t going to hold up signs with what he said. There won’t be t-shirts printed. This wasn’t interesting or creative, or rallying, it was stupid and embarrassing and offensive. That’s not trash talk.

Michael Jordan — one of the greatest trash talkers of all-time — was once famously getting chirped by Jim Jackson, in a rare game where Jackson was getting the better of Jordan. Jordan, finally fed-up with Jackson’s mouthiness, told Jackson to “Check his shoes”. Of course, Jackson was wearing Jordans.

So to the (mostly male) fans out there that reacted negatively and idiotically to Pillar’s suspension, it’s time you take a hard look at why you even watch baseball in the first place. Are you watching because the game inspires you, excites you, and leaves you screaming and speechless at the same time? Or are you watching because you want to see professional athletes use their fame as a justification for acting like assholes? If you’re in it for the latter, maybe this whole being a fan thing just isn’t working out for you. If that’s the case, Quidditch maybe?

Dan Szczepanek
Dan Szczepanek is the founder and Editor in Chief of Grandstand Central, an outlet he helped launch in 2017 to look at the intersectionality of sports and world around it. He's a recovering ad-man, and former politics wonk.

Is Competitive Eating Really a Sport?

Can Women’s Sports Capitalize On the USWNT Momentum?

Plus, what it was like playing in Toronto.
Read more
Culture

Recognizing the animated athletes who have demonstrated outstanding achievement in sport and sportsmanship.
Read more
Culture

Chris Mosier On Coming Out, Nike, and What the Future Holds for Trans Athletes

Plus, why young athletes need to see other athletes who look just like them.
Read more Is Competitive Eating Really a Sport?

Emily Weaver - July 16, 2019
Does scarfing down a large amount of hot dogs on the Fourth of July make you a competitive athlete or just insane?
Read more Trevor Huffman - July 15, 2019
Plus, the challenges of balancing relationships with the game.
Read more 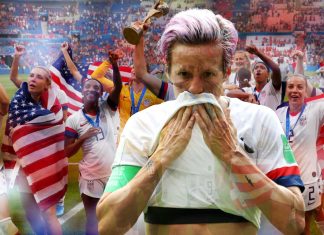 Can Women’s Sports Capitalize On the USWNT Momentum?

Ben Beecken - July 13, 2019
Could the United States Senate tip the scales when it comes to equal pay for women in sports by helping the Women's National Team in their quest?
Read more Derek Helling - July 11, 2019
If there's anything Star Wars should teach us about self-serving power that exploits others, it's that defeating a kleptocracy takes more than blowing up a space station.
Read more What Can the NHL Do to Diversify Its Fanbase?

Dan Szczepanek - July 9, 2019
We asked advocates and organizations to weigh-in on how hockey can become more inclusive.
Read more Trevor Huffman - July 8, 2019
Plus, what it was like playing in Toronto.
Read more